History of the family business.

The family business starts with Mr. Juan Parra Herrera, founder of the group as well a   barristered lawyer in the Illustrious Bars of Madrid and Cádiz. With more then 40 years experience, he was one of the first lawyers in the Campo de Gibraltar, province of Cádiz, Andalucia.

He has also been a real estate developer since 1974, devoting himself to the real estate investment and housing business in the Campo de Gibraltar area, both in rustic and urban land. He later went on to expand into the development of villas, semi-detached houses, apartment blocks and industrial and commercial premises, predominately in Andalucía.

Since 1988, he has been developing the Groups activity in SOTOGRANDE, mainly investing in the acquisition of urban plots with an overall global ownership of more than 250,000 m2 of land in sotogrande,   distributed in different areas of  said urbanization.

In 1992 he acquires the former HOTEL TENIS SOTOGRANDE, after NH SOTOGRANDE and today The 4 stars HOTEL EL ENCINAR, from which 3 plots were segregated, being one of them, the lands of the old Hípica Valderrama, in Sotogrande, today part of La Reserva complex. During the 90s and early 2000s he went on to exchange this land conforming today part of LA RESERVA, with FINANCIERA SOTOGRANDE SA, for an important number of plots in Sotogrande, becoming the second largest land owner in the area, together with the former FINANCIERA SOTOGRANDE S.A   today known as SOTOGRANDE SA.

That’s why he is one of the most experienced business when knowing about investments in Sotogrande, and that’s why, for more than 25 years, his family business, group of companies has positioned itself as one of the most influential companies in the area.

Currently, several promotions are being developed in the area by the group, with a current total of 100 apartments for rent, villas in SOTOGRANDE and several business projects for development on 37 hectares farm land in the surrounding area of SOTOGRANDE.

The group also owns land and real estate in the rest of Andalusia and Madrid and is preparing its international expansion in the UNITED ARAB EMIRATES, where it has strategic alliances with MI CASA PROPERTY SOLUTIONS a real estate agency with which is offering Tailored made   services for its elite Gulf clients envisaging real estate investments in SOTOGRANDE.

The group is in the process of launching a development of 4 exclusive villas in Sotogrande named Las 4 Lunas, under the GRUPO LOEN AND RED POINT quality seal.

Don Juan has a highly appreciated collection of books, pictorial art and antiques, being his passion and hobby and having achieved postgraduate education on these matters and having achieved the distinction of expert in detecting art forgeries from the Ramón Llul University of Barcelona.

He is currently retired from his profession but is the fundamental pillar of the group with his vast experience and is a role model for all.

Daughter of Don Juan Parra Herrera, she began her professional career in 2003.

Doctor in Private International Law and Commercial Law from the SP CEU Madrid University and from the Institute of Advanced International Legal Studies IALS London, Masters in EU Law and Economics from the Pantheon University Sorbonne Paris and the Complutense University of Madrid, university specialist in Community Law.

With a Bachelor of Law and Economics. She has been a fellow at UNESCO-UN in Paris and at the Universidad San Pablo CEU in Madrid in the department of private law. Researcher at said University since 2018 and university professor of Political Economy and Public Finance at the University of Cádiz.

International Referee collegiate at the Ciarb Chartered Institute of Arbitrators of London, professor and visiting speaker at the EU – MERCOSUR Congresses in Argentina and International Arbitration in Mexico, defender, founder and general secretary of several NGOs  in the  EU / Middle East Region.

She has practiced law for more than 19 years and has dual qualification, both in Continental Civil Law and in Common Law, by the Universities of Bristol and Gibraltar, and is a Barrister Lawyer at the Illustrious Bars of Madrid and Cádiz, in Spain and Solicitor and Barrister of the Supreme Court of Gibraltar, all of which she currently combines with the management of the law firms and the family real estate business group in Spain.

She is fluent in Spanish English French and German and is learning Arabic.

Through her leadership ,the Group aquires  more properties in the Cádiz province and begins to work with  rental business and asset management.

Her main activities in the group focused then on management of the family office being the General Adviser of the legal interests of the group.  She also supervised its institutional and international expansion.

The group has also sister companies in the legal services sector under PARRABOGADOS INTERNACIONAL and PARRA & PARRA ABOGADOS law firm, with offices in La Linea since 1981, Sotogrande, since 1999, Seville in 1999, Madrid since 2000 and Marbella since 2010. She has been its director for 19 years. See www.parrabogados.com

The rental management department is established, and the real estate brokerage division of its portfolio, which, between 2017 and 2019, operates under  the MAR ESTATES brand.

With PARRA & PARRA LAW FIRM Gibraltar, ROSARIO PARRA and PARHERLEX LTD has been operating since 2017 as a lawyer, Solicitor and Barrister in said jurisdiction. At this time the legal office in Gibraltar begins its operations. Visit. www.rosarioparra.com

In 2018, the group joins local partners with dual Spanish and Moroccan premises, with great contacts and experience in cross-border real estate investments between Spain (mainly Costa del Sol) and Morocco, and thus the TAHSEN brand is created. VID www-tahsen.es.

In 2019, a new headquarters for legal offices is opened in MARBELLA and the expansion to the Middle East began, and it is here in the Middle East where she marries her husband KHALDOUN FLIHAN.

In 2020 the generational change is completed and she succeeds her father as CEO of the real estate group.

Unfortunately, during 2020, and during the COVID 19 l lockdown, she suffers from a cancer that prevents her from progressing on several international projects, which are suspended until 2022. Nevertheless progress is made in the following areas; restructuring the business, generational change under the PARHER & PARBIS (together with her sister, her husband and her brother-in-law), brand focusing on its real estate portfolio management and in the implementation of the division of long-term and Holiday short rentals of the assets of the group.

To date, all the group’s headquarters have been centralized in one main building in order to optimize its management.

In 2022, international expansion is a priority, with focus on opening a channel of reciprocate real estate investments GULF – SOTOGRANDE with several projects and partnerships, among which are those signed with MI CASA PROPERTY SOLUTIONS in ABU DAHBI with whom the group is launching its new sister company under the brand SIRKHAL & MARAIN a tailored made real estate agency specializing exclusively on GULF and SOTOGRANDE reciprocal real estate investments. The group will enter the GULF market with their long term based partner, the prestigious Marbella construction company RED POINT and its sister company GRUPO LOEN, as developers, for the development of the 4 Lunas, consisting of 4 exclusive villas in Sotogrande starting September 2022.

The  chief management of this international expansion , together with the consolidation of the international real estate brokerage divisions, has been handed over to her husband, KHALDOUN FLIHAN under the SIRKHAL & MARRAIN brand, portfolios management under the PARHERSONS  brand and its  sister law firm  company  LEGALATIONAL, specializing on GULF investor golden visas in Spain  and international real estate investments legal and taxing services Her passions  are  traveling, learning new languages and cultures, reading, the sea and yoga. She has recently begun to cultivate her interest in art, a passion inherited from her father.

Her sister SANDRA PARRA directs the local real estate management of the group since November 2021 whilst her brother-in-law LUKE IZATT, has been the commercial & marketing manager, since 2020. 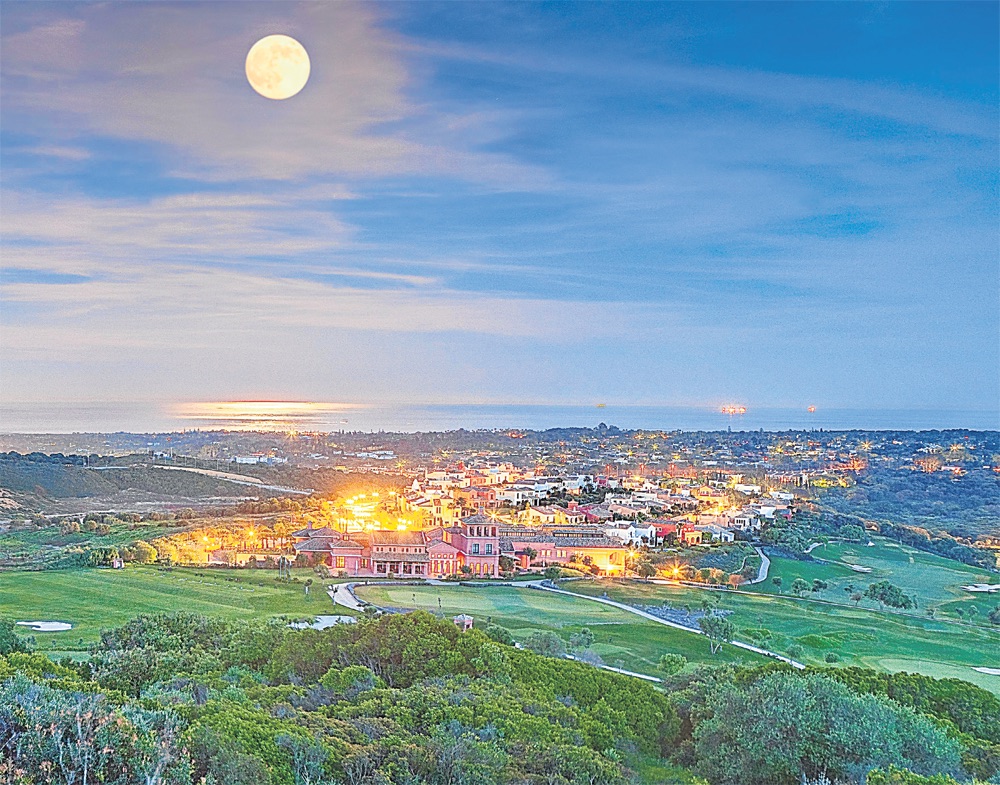 Sotogrande is one of the most prestigious residential developments in Europe. It is within easy reach of several nearby towns, including Gibraltar, Tarifa, Marbella, Jerez de la Frontera, among others, and very close to three international airports.

Its inhabitants, generally with a high purchasing power, can enjoy the best services in an environment of great privacy and security. It is surrounded by two clean Mediterranean beaches with good water, a lively marina, four adjacent golf courses – one of them the 27-hole Almenara golf course – and half a dozen additional courses, a golf academy to start enjoying a unique sport with a long tradition in the area, an equestrian club, an excellent tennis and paddle tennis club, several polo fields of international prestige and an desirable gastronomic offer based on the unique quality of the fish and seafood of the area.

We use cookies on our website to give you the most relevant experience by remembering your preferences and repeat visits. By clicking “Accept All”, you consent to the use of ALL the cookies. However, you may visit "Cookie Settings" to provide a controlled consent.
Cookie SettingsAccept All
Manage consent

This website uses cookies to improve your experience while you navigate through the website. Out of these, the cookies that are categorized as necessary are stored on your browser as they are essential for the working of basic functionalities of the website. We also use third-party cookies that help us analyze and understand how you use this website. These cookies will be stored in your browser only with your consent. You also have the option to opt-out of these cookies. But opting out of some of these cookies may affect your browsing experience.
Necessary Always Enabled
Necessary cookies are absolutely essential for the website to function properly. These cookies ensure basic functionalities and security features of the website, anonymously.
Functional
Functional cookies help to perform certain functionalities like sharing the content of the website on social media platforms, collect feedbacks, and other third-party features.
Performance
Performance cookies are used to understand and analyze the key performance indexes of the website which helps in delivering a better user experience for the visitors.
Analytics
Analytical cookies are used to understand how visitors interact with the website. These cookies help provide information on metrics the number of visitors, bounce rate, traffic source, etc.
Advertisement
Advertisement cookies are used to provide visitors with relevant ads and marketing campaigns. These cookies track visitors across websites and collect information to provide customized ads.
Others
Other uncategorized cookies are those that are being analyzed and have not been classified into a category as yet.
SAVE & ACCEPT